Sexing goldfish can be tricky, especially if you’re not sure what signs or physical characteristics to look out for. My first pair of goldfish ended up being a female and male, despite the pet store I purchased them from telling me otherwise.

You can probably imagine my surprise when one day I looked into my aquarium and spotted hundreds of baby fish. Since then, I always make sure to sex my goldfish myself to prevent this type of situation from occurring again.

So, whether you want to breed goldfish or make certain you don’t end up with babies, here’s everything you need to know on how to sex goldfish and the physical goldfish gender differences.

Although some fish like clownfish are able to change their sex (known as sequential hermaphroditism), goldfish are not one of them able to do so.

How to Tell Gender of Goldfish

Sexing goldfish, especially if you own multiple fish, is important for preventing aggression and unwanted fry. Keeping a single female with multiple males can be dangerous as all the males will hassle and attempt to breed with her, resulting in exhaustion, stress, and potentially death.

On the flip side, if you own more than one male goldfish and don’t have a big enough tank, it could lead to fighting and territorial issues. This is less likely to happen in large tanks and ponds as the extra space will help prevent aggression and males battling for dominance.

I’ll be going over each physical characteristic difference in detail below, so be sure to stick around! These physical differences are the same for all species of goldfish, including the comet goldfish, oranda goldfish, ryukin goldfish, telescope eye goldfish, and pearlscale goldfish.

Female goldfish are normally more brightly colored than male goldfish. This can be a bit difficult to observe if you only have a single goldfish as you won’t have any other goldfish to compare them to.

However, if you have multiple goldfish in your aquarium and notice one is a little duller in appearance, it’s possible that they are male. Alternatively, if some of your goldfish are more vividly colored than other fish, they could be female.

Female goldfish tend to have a bulbous, round vent, so if you notice this attribute in your fish, it’s likely that they are female. Male goldfish, on the other hand, usually have a slit-shaped vent that curves inwards.

You can find your goldfish’s vent under their tail, though it can be quite hard to spot in males. During the breeding season, female goldfish tend to have a swollen, enlarged vent, making it easy to see.

Size and Length of Pectoral Fins

The pectoral fins on a fish are two fins that sit on each side of the body, just behind the gills. The shape and length of the pectoral fins is slightly different in males and females, so it’s a good indicator to help you figure out the gender of your fish.

Male goldfish have longer and more pointed pectoral fins, while females have rounder and shorter fins.

Male goldfish have a pronounced ridge that spans from the rear of their pelvic fins to opening of the vent. In females, the ridge is either much smaller or absent altogether.

During the breeding season, which usually runs from spring to fall, goldfish undergo a couple of changes. Male goldfish will have breeding stars (also known as breeding tubercles), which are usually located on the leading rays of their pectoral fins and gill covers.

However, breeding stars can also be found on the head, around the eyes, the body, and the leading rays of the pelvic fins.

Tubercles are triggered by testosterone in males and are something that happens naturally during the breeding season or when the animal is ready to mate.

See what tubercles look like in the video below…

It’s not clear why male goldfish sport breeding tubercles during the breeding season, but it’s thought that they’re used to help protect against injury, indicate good health to potential mates, show dominance to other goldfish males, and indicate male/female differentiation.

Additionally, the vent on male fishes will become longer and more open, while the female’s will start protruding. She will also have a more swollen abdomen.

When the female is ready to breed, she will release pheromones into the water to lure males. Both the female and male will pair off during the breeding season and stay close together until spawning.

How to Tell Difference Between Breeding Tubercles and Ich Parasite

Breeding stars and the ich parasite look extremely similar as they both cause white dots to appear on your fish’s body. If left untreated or to progress, ich can be deadly despite being fairly easy to treat, so it’s important to understand the difference between breeding stars and this parasite.

Breeding tubercles are typically found on males, so if you’re certain your goldfish is female and notice small white bumps on their body and around their gills, it’s most likely ich.

Additionally, breeding tubercles typically present as small dots in a regular, organized pattern. They are usually located just on the gill covers.

Ich, on the other hand, appears as an assortment of white specks of varying sizes. It will look like your fish has been sprinkled with salt. Ich usually affects the entirety of your fish’s body, including the fins, tail, and gill covers.

Chasing Behavior During the Spawning Season

Another sign to help you figure out your goldfish’s sex is by observing their behavior, especially around other goldfish. Females are usually more active than their male counterparts.

Male goldfish tend to be a little less active than females, but during the breeding season, they will be much more energetic and begin pursuing and nudging females. This is breeding behavior, so if you have more than one goldfish in your tank and spectate chasing behavior and nudging, you could have a female and male.

Additionally, male chasing also extends to other males as a way to display dominance. If you have more than one goldfish in your tank and notice them chasing one another, especially if aggression is involved, you could have fish of the male sex.

One method that can help you sex goldfish, patiucalry in tanks with multiple fish, is by releasing one female into the aquarium. You’ll need to be 100% certain that the fish is female, so consider asking your local pet store whether they can help you pick out a female fish.

After putting the female fish into your tank or pond, check your other fishes’ behavior.

During the breeding season, female and male goldfish who have reached sexual maturity will display mating behavior. The female fish will become larger and swollen around the abdominal area, while the male fish will start chasing and nudging her.

This is to encourage the female to release eggs. The mating chase will often span several hours to almost the point of exhaustion in both animals.

In addition to chasing during the spawning process, male goldfish may also nip at the female’s fins and tails.

Eventually, the female will release her eggs, which will usually stick to plants, substrate, or the sides of the tank. The male goldfish will then release milt (fish sperm) to fertilize them.

Goldfish eggs look like small, transparent bubbles that are either yellow, white, or orange in color.

As mentioned above, when goldfish spawn, the female will release eggs, whereas the male will release milt. Females can lay up to 1,000 eggs at once during spawning, but both female and male goldfish, as well as any other aquatic animals in your tank, will attempt to eat the eggs.

If you want to raise goldfish fry (babies), your best bet is to remove the eggs as soon as possible and relocate them to a separate tank. Generally they are going to need a heater so make sure that tank has one.

After hatching, the fry will stay at the bottom of the tank for several days before becoming free-swimming.

Both male and female goldfish reach maturity once they reach 9 to 12 months of age. Goldfish will be capable of reproducing after this age, so if you have multiple fish and notice breeding behavior, you could have males and females.

How Old Do Goldfish Need to Be to Tell If They Are Male or Female?

Female and male goldfish don’t display sexual dimorphism (physical differences) until they reach adulthood. This means you won’t be able to reliably tell the gender of your fish when they are juveniles (young fish).

Both female and male fish reach maturity at the same age, usually around 9 to 12 months old. At this point, you should be able to observe goldfish gender differences, such as a rounder body shape in females, pointed and longer pectoral fin shape in males, etc.

The majority of goldfish in pet stores are roughly 2 to 3 months of age, so if you’ve only just recently bought your fish, they won’t be sexually dimorphic for at least 6 months. After this time, you should start seeing physical changes in your fish to help you tell the gender of them.

As mentioned earlier, you won’t be able to sex your goldfish until they are around 9 to 12 months old, so before this age, both genders will look identical. Once your fish are sexually mature, goldfish gender identification will be a lot simpler.

Sexing fish is much easier during the breeding season, so keep an eye out for spawning season signs like a mating chase during the warmer months if you keep your fish outside.

If you know any other goldfish owners, be sure to share this guide so they can tell the gender of their fish. Additionally, if you need any other helpful tips on goldfish care or even pregnant tiger barbs, be sure to check out my other guides here!

Why did my Goldfish Die? <br>Reasons and Prevention ([year] Guide) 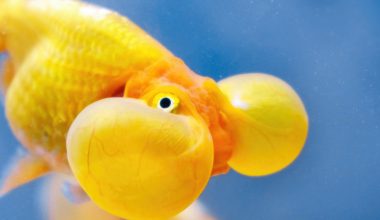 Read More
As a child we all loved visiting the pet store and seeing the flashes of gold, yellow, and…
Read More 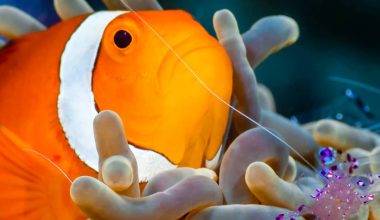 Read More
With their striking and endearing appearance, it’s no wonder clownfish are such a popular choice for many saltwater…
Read More 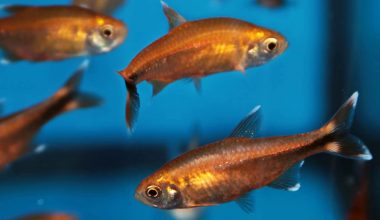 Read More
The silvertip tetra is one of the most beautiful species of freshwater fish in the aquarium hobby, boasting…
Read More 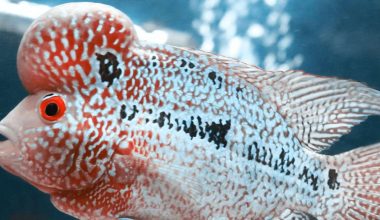 Read More
Flowerhorn cichlids are one of the most stunning and rewarding fish you can own. They have vivid colors,…
Read More 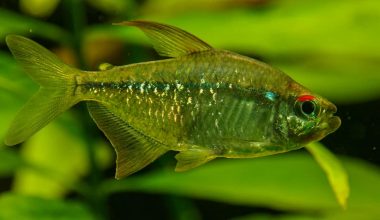 Read More
With a hint of green sparkling at the edges of its sleek, silver body, it’s no wonder scientists…
Read More 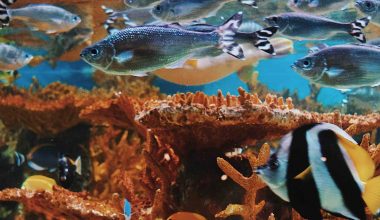 Read More
When you own a big tank, finding a filter can be a bit challenging as you need one…
Read More