Do goldfish get lonely? Can they live alone? Truth Revealed

Whether you’re a first time goldfish owner or a professional aquarist, you might be wondering “Do goldfish get lonely?” Lucky for you we’ve written a guide about how goldfish can live alone, whether goldfish need other goldfish, and all aspects of lonely goldfishes.

Do Goldfish Get Lonely?

As far as we know goldfish do not get lonely. Though it is hard to read into a goldfish’s psyche we can certainly say living alone is not detrimental to a goldfish’s health. In fact the two longest-living goldfish (average 44 years old), both were solitary fish. Most goldfish only lives up 10 years or less.

While you and I might think goldfish get lonely or depressed living this long in solitude, the owner of the second oldest goldfish attributes his long life to a healthy diet and his goldfish tank being put out into the garden for occasional sun exposure.

Can a goldfish live alone?

Yes, goldfish are not schooling fish, even though they’re kept in multitudes at most pet stores. We will say that some goldfish enjoy company and can be social animals. When multiple are present in the same tank they will exhibit mimicking behavior that some people interpret as schooling. A goldfish living alone isn’t necessarily a bad thing, and it won’t get lonely without a friend. However, while your pet goldfish might not get lonely there is a possibility your goldfish could be sad or bored because of solitary life.

How do I know if my goldfish is sad?

A few telltale signs that your pet goldfish is sad or depressed are if they are refusing food during feeding, sitting at the bottom of the tank or in one spot, and generally being inactive. Generally, goldfish love to play and hide in decor, and will excitedly swim to the top of the tank when their owner approaches at feeding time. As an active fish, any drop or disinterest in activities should be cause for concern.

Is it cruel to keep one goldfish?

It is not cruel to only keep one goldfish as long as you are providing some enrichment. Enrichment can come in the form of other tank mates, new or changed decor, or new plants. Aside from proper enrichment, make sure to maintain the water quality and have the right ph levels on your tank. Providing a healthy and clean environment for your goldfish means less stress for them.

Do goldfish get bored in tanks?

Whether or not goldfish get bored in their tanks depends on how you keep the goldfish occupied. Many owners think that these pet fish can stay in tanks of five gallons or less, not realizing that their aquarium needs to be a minimum of 30 gallons.

Goldfish are extremely intelligent and have been trained to swim through hoops, without enough space or enrichment your goldfish can possibly become depressed from boredom.

Do goldfish need to be in pairs?

While we don’t have any evidence that goldfish get lonely, according to the Royal Society for the Prevention of Cruelty to Animals (RSPCA) it is recommended to keep at least two goldfish in a tank to promote companionship and activity.

However, it is not always practical to keep a big aquarium to house two or more goldfish. While one fish requires a minimum of a 30 gallon fish tank, each additional fish requires 10 gallons. Other fish can provide the same benefit of providing your goldfish company, while not needing the larger tank.

Here are some other things you should know about goldfish tank size.

Do goldfish get lonely when one dies

There hasn’t been any evidence that goldfish get lonely or grieve when other goldfish living in close proximity die. If your goldfish has lived with a tank mate its whole life, what you interpret as lonely is likely boredom. If there has been a recent death in your tank you can explore a few different enrichment and tank mate options later in this article.

Goldfish are extremely intelligent fish and require a rich diversity of decor, and enrichment to interact within their aquarium.

How can you tell if a goldfish is happy?

To tell if a goldfish is happy, observe its normal behaviors. Your goldfish should be actively swimming around the tank, playing in decor, and eating regularly. Its appearance should be shiny scales, with bright and alert eyes.

Considering a tank mate for your goldfish

When considering tank mates for your goldfish ensure that your aquarium will be large enough to house more fish. Overcrowded tanks will cause aggression, depression, and bad water parameters. Undersized tanks can also cause stunted growth regardless of whether or not there is enough food. Maintaining a clean environment is easier with the right tank and the appropriate number of fish.

It is good to know that goldfish are generally calm and lack aggression unless size or food requirements are not being met. When choosing a compatible tank mate be sure to consider if new fish are capable of living in similar temperature, are tropical fish, schooling fish, or small fish.

While goldfish are hardy fish, changing the temperature of your tank could cause health problems as goldfish are not cold water fish. On the other hand, you might need a bigger tank if you want to place schooling fish in your aquarium as tank mates.

Be sure to consider the size of other fish species when planning tank mates as goldfish will eat smaller fish. Size differences can be overcome if you’re set on having a specific tank mate as goldfish are very slow swimmers. Fast, small fish can escape if needed.

Finally, consider what food all the fish in the tank will eat. Consider omnivores so other fish aren’t outcompeting your goldfish for food during feeding time.

When adding any fish to your tank be sure to check your tank water regularly for water parameters, diseases, and parasites that could have come with new fish.

Compatible tank mates for goldfish include rosy barbs, white cloud mountain minnows, giant danios, zebra danios, snails, and other goldfish. Unusual varieties of goldfish such as the fancy varieties should be kept together so that they don’t outcompete each other for resources. Even though you might think fancy goldfish are the same type of fish as common goldfish, they can have vastly different needs and lifestyles.

The other fish listed above are all schooling species, though generally smaller than goldfish, schooling fish tend to be much faster and can escape. Zebra danios in particular are very fast, meaning that they do well and are considered compatible tank mates.

If keeping rosy barbs with your goldfish it is necessary to have more than one fish. It is also important to note that these fish nip at other fish when they aren’t happy which could potentially cause some problems in your tank.

Giant danios are an excellent tank mate choice as they require the same water temperature as other goldfish. There is a risk of them outcompeting your goldfish for food and need to have an eye kept on them at dinner time.

Snails do well with goldfish and other fish, though be careful having more than one in your aquarium as they will eagerly reproduce when given the chance. While goldfish benefit from the company of peaceful snails, be sure to choose an adult snail as goldfish are liable to eat smaller snails.

How do goldfish communicate?

All fish have a lateral line, and goldfish are no different. Using their lateral line goldfish produce, and are able to read currents and ripples traveling through the water. These signals tell goldfish things like if there is a school of social fish traveling in the same direction, if there’s a predator nearby in outdoor ponds, or if the movement of plants on one side of the tank mimics the same plants on the other side.

Goldfish also have excellent hearing, but you’re out of luck if you want to have a conversation. Unlike other fish, not a single goldfish has been recorded making a croak, gurgle, or snap.

Do goldfish get excited to see you?

It does seem as if goldfish can identify different people that frequent their tank. This makes sense, since goldfish live for upwards of 15 years on average it is likely that they’ll start to recognize the hand that feeds them.

Not only will your goldfish be able to recognize you, but depending on your tank size and where it sits in your house (in a well-populated area or not) your goldfish will be able to distinguish movement and individuals outside of their tank.

While they’re generally not social animals, goldfish will become comfortable and even excited to see you over time. They will likely be frightened of new people, especially if it’s not one they’ve seen outside their community tanks before.

These fish love to play with enrichment toys in their tank and require a large amount of mental stimulation. Keeping large, colorful stones at the bottom of your tank provides a substrate with a wide variety of textures for your goldfish. Other popular decor includes bridges and tunnels for your goldfish to swim through, plants to hide in, and decor without sharp edges.

If you’re up for a challenge some goldfish have even been taught to swim through hoops and push balls. We recommend keeping a moss ball in your goldfish tank to add a bit of greenery and fun.

Can I touch my goldfish?

Generally, goldfish don’t like bright lights, loud noises, or being touched along their bodies. While they might be excited to see you at feeding time they are not social creatures and should not be petted like a dog. Some goldfish will allow you to hand feed them, but remember to be gentle and don’t do it often.

If you do decide to hand-feed your fish, make sure that your hands don’t have any chemicals from soap or lotion on them. Not only can this mess up your water parameters, but it can also potentially kill your fish!

In conclusion, it’s not the end of the world if you only keep one goldfish but you should be prepared to provide plenty of enriching activities and decor to keep boredom at bay.

Can fish drown? The Surprising Answer

What Does A Goldfish Eat? Goldfish Diet Recommendations ([year]) 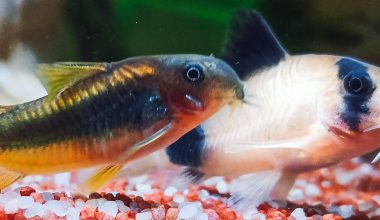 Read More
With over 160 species in the cory genus, there are a staggering number of cory catfish, which can…
Read More 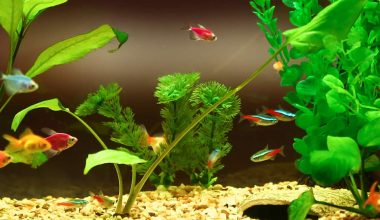 Read More
Selecting the best fish for 10-gallon tank can be difficult due to its limited size. And, unfortunately, many…
Read More 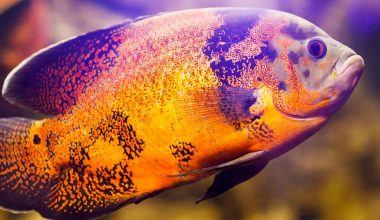 Read More
Oscars are stunning and interesting fish to own, but their care needs are often overlooked by most people.…
Read More 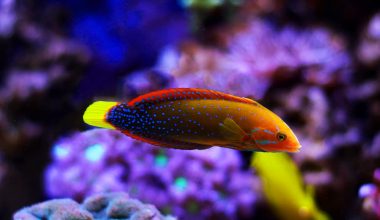 Read More
Saltwater wrasses are an incredibly vibrant and stunning species, making them an attractive addition to any marine aquarium…
Read More 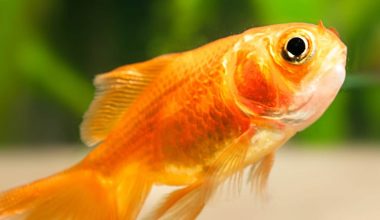 Read More
Sexing goldfish can be tricky, especially if you’re not sure what signs or physical characteristics to look out…
Read More 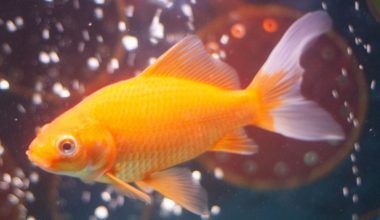 Read More
Everyone has had the classic goldfish as their first pets, but if you’re looking to spice up your…
Read More