Bristle Worm: Everything You Need To Know

What is a bristle worm?

A segmented worm, the bristle worm gets its name from the hairs or tiny bristles that stick out of each of their segments. The term bristle worm is a fairly broad term for these tank inhabitants as there are more than 10,000 species. Within these 10,000 species there are both bad and good worms and depending on which type of these marine worms are in your aquarium you might need to remove them immediately.

The fireworm is generally considered to be one of the bad worms and should be removed from your saltwater tank as soon as possible. More specifically this worm species has bristles which acts as their defensive mechanism that will detach from their body segment and can penetrate the skin and cause severe pain. Some species even have a mild neurotoxin in their bristles.

The main difference between fireworms and other bristle worms is that fireworms pose a threat to humans and other inhabitants of your saltwater aquarium.

When trying to decide whether the worms in your fish tank are beneficial or not use our chart below to help you identify what kind of worm you have.

Whereas bristle worms are scavengers and won’t attack unprovoked, the fire worm is a natural predator and will actively seek out small fish, hermit crabs, and other invertebrates to attack with their venomous bristles.

You might notice your bristle worm snacking on dead fish or invertebrates. Bristle worms will not eat healthy fish, and don’t have the capacity to kill their prey as their bristles are generally not venomous.

A bristle worm are members of the polychaete family and are segmented worms. Polychaete means “many hairs” in Latin. Like earthworms, bristle worms have small hair like appendages extending off of each of their segmented bodies called parapodia. These appendages are part of their circulatory system, help them breathe, and assist in movement. However, parapodia and bristles are completely different structures.

These worms are grayish/pink in color and have sharp, hair-like bristles sticking out of each segmented body part. The common bristle worm has no venom, but you should wear gloves while handling as their bristles can still cause irritation to the skin.

Each bristle worm has a proper head region with eyes, and sensory organs such as antennae and palps. They are well known for being hardy and are extremophiles.

There is a bristle worm species called the “Pompeii worm” that is one of the only creatures known to be capable of inhibiting deep sea hydrothermal vents due to their extreme temperature tolerance.

What does a bristle worm do?

Bristle worms, much like other scavengers, are beneficial for your aquarium and will help keep your marine tank clean by eating decaying matter and uneaten fish food.

If you’re looking to reduce the amount of bristle worms in your saltwater aquariums you could use a turkey baster to suck up any leftover food or decaying matter.

While bristle worms make great members of your aquarium cleanup crew you shouldn’t be depending on them to remove all fish food and dead organic matter. To do so is to potentially allow water fouling and poor water quality which can lead to other potential problems. Be sure to actively remove leftover food in your aquarium using a vacuum, suction, or a net.

The common bristle worm is not a predatory species and will not kill fish. In fact, the only time you will see bristle worms eat fish is when the fish was already dead or dying.

However, bad bristle worms such as the bobbit worm, which can grow up to 10 feet long and is frighteningly deemed the “Nightmare of your aquarium” will attack and kill healthy fish.

Should You Keep a Bristle Worm in Your Aquarium?

Whether or not you keep bristle worms in your aquarium is a matter of personal preference. Some aquarium hobbyists find these creepy crawlies too weird to keep in their tank, other’s appreciate having them as part of their cleanup crew due to their fondness of eating dead and decaying material. Furthermore, bristle worms prevent dead animals from rotting in your aquarium, especially if you don’t initially notice the dead animal.

However, you should always identify and ensure that you are keeping good bristle worms in your aquarium, not ones that will kill other inhabitants.

Where Do Bristle Worms Come From?

Bristle worms are often unknowingly added to saltwater aquariums with the addition of live sand or rock. These live rock hitchhikers can go unnoticed for weeks or even months as they are nocturnal creatures and will spend most of their daylight hours hiding in the live rocks.

How to get rid of bristle worms in saltwater tanks?

While they are beneficial to the reef tank you might decide you have too many bristle worms. The easiest way to remove bristle worms is to reduce the amount of food you are feeding your fish as most bristle worms are just looking for a free meal and take advantage of aquarists overfeeding their tank.

However, for bristle worms that refuse to leave your reef tank there are ways to remove them using traps, predators, or physical removal methods.

NEVER try to pick up a bristle worm using your bare hands. When provoked they will release their bristles that will lodge in your skin much like splinters, even worse the affected area will remain red and inflamed for a while even after bristle removal. To remove the bristles will require tweezers and are quite hard to see.

Even if you are not removing bristle worms from a reef tank, if you know they inhabit the tank you should wear gloves just in case.

To physically remove bristle worms from your saltwater fish tank you can use a gravel vacuum or another suctioning device. For smaller worms you might require tweezers to aid in the removal. As bristle worms like to nestle into the crooks and crevices of live rock we recommend transferring your live rock to a separate tank containing saltwater then stir the water using a rod or drinking straw. This will create a current that will draw the individual worms out. For those worms that remain stuck, you might need to consider other removal methods.

How to make a bristle worm trap

Step 3: Glue the sides to seal the bottle. Be sure to use aquarium safe superglue or silicone as the trap might sit in your aquarium for a while. While it is possible to secure the bottle without using a sealant, sometimes bristle worms can still escape through the cracks.

Step 4: Place bait inside the trap. This can be shrimp, crab, or other food but will preferably be stinky and beginning to rot.

The premise of this trap is that the bait will draw the bristle worm in but they will not be able to get back out through the small opening. Use of a bigger bottle might allow the worm to escape.

This video shows how to make a bristle worm trap using a soda bottle.

Step 2: Cut an “X” on the top of the lid, creating four triangles.

Step 3: Push the triangle down in the middle, bending to create a semi-permanent gap. The gap should be approximately the same size as the bristle worms you are trying to catch.

Step 4: Bait your trap with shrimp, crab, or other stinky food, extra points if it’s starting to rot.

Step 5: Place bait in the bottom of your container and the container in the tank, leave in your tank until you have caught the number of bristle worms you would like to get rid of.

The benefit of both of these traps is that once used you can toss them out with the bristle worms inside. While not perfect (the worms can still escape), they are a cheap way to trap and get rid of bristle worms.

Both of these traps require using bait, be sure to remove this bait after 1 or 2 days or risk foul water.

If you don’t want to do the heavy lifting of making a trap or physically removing these pests you can use fish and other tank members to remove these pests for you.

Natural predators of bristle worms include:

It’s important to note that this method isn’t entirely dependable. Arrow crabs might decide that they would rather not eat bristle worms and you might have to purchase a different predator in attempts to vanquish the pets.

When using live predators to remove your bristle worms you should do thorough research. The term bristle worm encompasses a large variety of polychaetes and while your arrow crab might like snacking on some worms, other worms might not strike their fancy.

Additionally, when choosing predators you should find species that like to inhabit the live rock of the aquarium and will explore the crevices where bristle worms like to inhabit.

Can you touch a bristle worm?

You should NEVER touch a bristle worm with your bare hand, especially if you have not pre-identified what species it is. Venomous worms such as bobbit worms can cause serious harm to humans. Thankfully, there are no human fatalities caused by bobbit worms, and this species is fairly unlikely to sneak into your reef tanks, though read more about this one hiding in a man’s aquarium for two years!

What happens if you touch a bristle worm

If you touch a bristle worm it will likely lodge its bristles in your bare skin. Many describe this feeling as having a bunch of tiny shards of glass stuck in their hand, and the surrounding area will become red and inflamed. Other symptoms include a rash, swelling, and pain lasting even after the removal of the bristles.

How to treat bristle worm stings

You should first remove the bristles using tweezers or adhesive tape. Since they can be hard to see and remain stuck even after the use of tweezers, adhesive tape can help pull out the tiny shards. After removing all bristles apply hydrocortisone cream, and take your preferred pain medication. If at any time you begin to notice signs of infection you should contact your doctor.

In conclusion, the common bristle worm can be a benefactor for your fish tank, but when improperly identified can cause issues. Whether you get rid of these pests or not we hope that our comprehensive guide has helped you decide and educate you on these aquatic creepy crawly creatures.

If this article was informative for you, see our other articles about aquarium worms such as detritus worms and bloodworms. 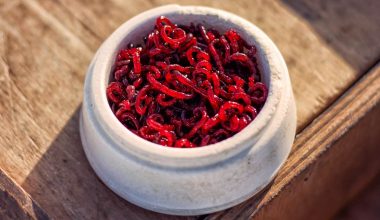 Read More
While they may look a bit creepy on the outset, fresh or preserved bloodworms are a great source…
Read More 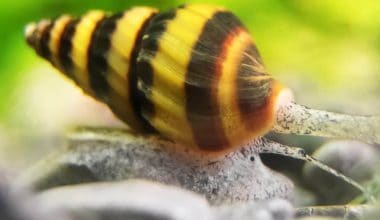 Read More
The assassin snail is a unique but practical addition to a freshwater tank due to their stunning appearance,…
Read More 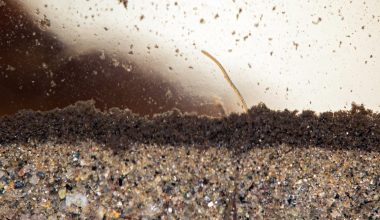 Read More
If you’ve ever seen long, thin, white strands of hair-like beings squirming around in your tank you might…
Read More 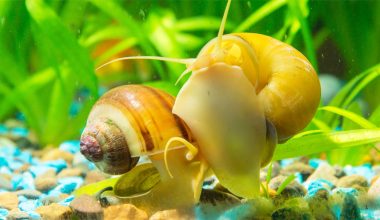 Read More
Whether you are purposefully breeding mystery snails, or you didn’t notice a stray clutch of eggs, this guide…
Read More 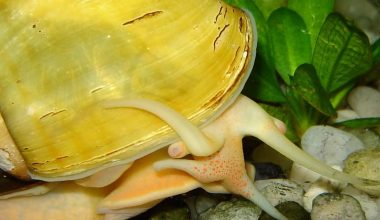 Read More
Mystery snails are a unique addition to any freshwater aquarium, with the added benefit of being excellent clean-up…
Read More 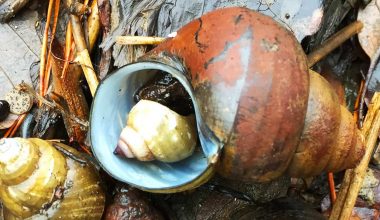 Read More
Quiet, cute, and covered in slime may not be the most attractive way to describe a new friend,…
Read More